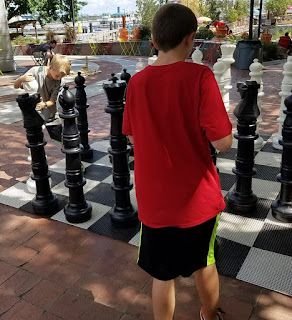 How to not exacerbate shame or embarrassment that results from becoming emotionally dysregulated.

One year during Summer Trip Camp we stopped by this outdoor park in Philadelphia that had this giant chess set. "Ethan" and "Adam", who are both very good players were playing. If you're not familiar with chess when the game has reached a point where you're going to win you say "checkmate".
When this game got to that point Ethan said checkmate to Adam. Adam pushed over his King piece as hard as he could. It made a loud sound and startled the kids nearby, some of whom were not with us. Adam had an angry look on his face and his fists clenched. I had never seen him like this before as he was always even-tempered. I told him it was okay and to go walk around the park for a minute as we were gathering everyone to leave.
On the walk back to the van Adam walked with his fists clenched and didn't say anything for the rest of the day. Before he left for dismissal I told him that it was okay he got upset and he might want to think about quickly apologizing to Ethan the next day as it startled Ethan when he pushed over the piece when he lost.
I emailed Adam's mother to let her know what happened. She explained to me that he used to have tremendous difficulty with losing games and this was the first time in a long time he had become dysregulated as a result of losing. Adam did tell her what happened and expressed that he felt ashamed about it.
The next day I did hear Adam apologize to Ethan who was empathetic and told Adam it was okay. (Ethan had a propensity to cry very easily at that age which often made him the target of ridicule.)
I didn't say anything to Adam about apologizing, I let it go because I knew he felt ashamed of his actions that I didn't want to bring any more attention to it, particularly after he apologized.
-----------------------------------------------------------------------------
One of the things I was guilty of when my son was younger was trying to get him to admit the truth when he would lie about something he was ashamed about. Most of the time this would just exacerbate his shame about lying and causes a blow up.
Many boys do not express feeling ashamed or embarrassed by using those words. Sometimes parents feel the need to get some type of verbal acknowledgement that their son knows what he did was inappropriate. This attempt to get verbal acknowledgement (as I used to do) only makes things worse.
If your son makes self-defeating comments after he does something wrong ("I'm stupid, I hate myself, I want to die", etc.) assume that is his way of verbalizing his shame or embarrassment.
Do not try to rehash the events that happened. Do not try to get him to admit his wrong doing.
Do not try to get him to verbalize "feeling words".
Do acknowledge his feeling ashamed or embarrassed and normalize it by letting him know that we all do things at times we feel ashamed or embarrassed about, then move on.
The human capacity to experience shame is stronger than any other emotion. Acknowledging it, normalizing it and moving on is all that is needed most of the time.
Please subscribe to the ADHD Dude mailing list for occasional emails with helpful information. (Your information will never be shared and you will not be bombarded with emails).
Nationa/International list: https://www.subscribepage.com/adhddude
Philadelphia-area list: https://www.subscribepage.com/adhddudephila
adhd adhd dude emotional regulation Ryan Wexelblatt