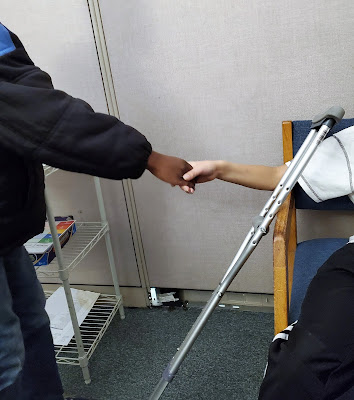 4th Grade Dudes Working It Out

"Dante" (with the broken leg thus the crutches) and "Adam" (both 10) are in the same class and are the only two in their class who have a genuine friendship. They are both athletic, have similar interests and some "street smarts". The other students in their class are younger or not as socially competent as these two.
Neither of them cry easily so I was surprised when I was asked to come get Dante the other day and he had been crying.
When I brought Dante back to my office he explained that Adam had made a joke about him liking one of the girls in his class. I was surprised he had this reaction given that Dante has a propensity to be a "tough guy". He hangs out with older boys at home and I'm sure gets his share of ribbing given that he's the youngest amongst this group of boys where he lives.
I asked him if we could speak to Adam together, he said that was fine but he didn't walk to start the conversation. I told him I would start it, he could say whatever he wanted and we would be done.
When I brought Adam to my office I explained why Dante was upset. It turned out that Adam didn't say what Dante thought. Adam explained himself, they shook hands and I took them back to class.
Here's what I did not do:
What I did do:
In my experience, boys can often let things go/move on easier than girls can and don't need to verbalize they understand how each other is feeling, they just know.
------------------------------------------------------------------------------
Too often, I've heard about well-meaning school counselors have what I call a mini therapy session with kids where they try to get kids to follow a communication template or focus on getting them to use "feeling words". Way too often I've heard about parents intervening in conflicts, denying their son the opportunity to independently problem solve on his own.
If your son has a conflict with a friend, neighbor, etc, let them work it out. Instead of jumping in to try to fix things ask if they need help (if things escalate) rather than just intervening because you're uncomfortable with the conflict.
Allowing kids to work out conflicts, or in this case a misunderstanding teaches them they are capable of independent problem solving, which in turn helps to build their confidence and self-advocacy skills
------------------------------------------------------------------------------