"30% of the behavior problems at my school could be easily remedied by allowing kids to eat when they need it." - ADHD Dude - Ryan Wexelblatt 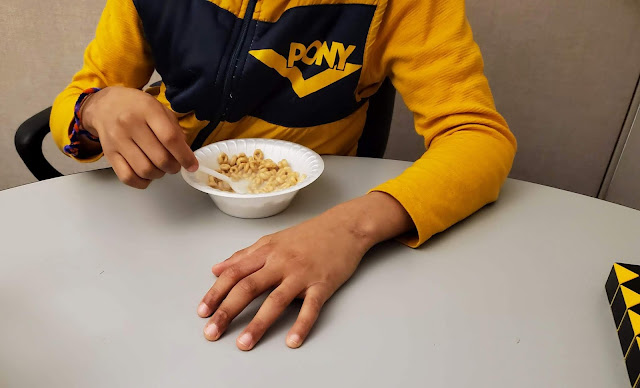 I said this when I presented at the International Conference on ADHD this past November and got nods from the teachers and OTs in the audience.
The age group I primarily work with in my practice is 11-15. As a result, I always have kept snacks for kids in my practice office because I get better cooperation from kids if they feel satiated.
When you have ADHD, sensory issues (such as being hungry) can contribute to emotional dysregulation. When you're a 12 year old going through puberty & have fast metabolism, you need to eat.
That was the case with "Derek" last week. I came to get him when he was sent out of class, he began his usual "information informer" routine of giving a long winded story about how was wronged in the situation (this stems from lagging perspective taking skills). In the middle of this he mentioned he didn't get to eat breakfast in homeroom because he came in late. I offered him cereal, he quieted down almost immediately and went back to class.
Multiple times a week I offer the guys I work with food when they say they're hungry or I ask if they may be hungry.
Given that stimulant medications temporarily suppress appetite it's very easy for kids who take ADHD meds to get hungry and not realize it. If they have sensory issues that just exacerbates the problem.
My principal doesn't really like when I do this but she was never a 12 year old boy, or one with ADHD. 😉
If your son sometimes becomes dysregulated it's a good idea to ask him if he's hungry because he may not realize if he is. if he is hungry I suggest offering only healthy options (that may not be his favorite foods) because you don't want him associating becoming emotionally dysregulated with being rewarded with his favorite foods, particularly if they're not something you would want him eating in excess.
👉Please subscribe to the YouTube channel: https://www.youtube.com/channel/UCL3hX8PFFe2UI_BlnQvQYFw
Sign up for the ADHD Dude mailing list for occasional emails with helpful information:
General list: https://www.subscribepage.com/adhddude
Philadelphia, PA area list: https://www.subscribepage.com/adhddudephilalist
adhd adhd dude emotional regulation Ryan Wexelblatt
Location: Bryn Mawr, PA, USA