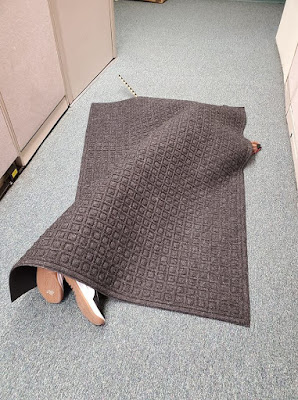 8:45AM
Some of you may remember "Jason" from an older post, when he was also under the carpet. Jason is a 12 year old 6th grader. I would say socially and emotionally he's about 9.
Jason takes his ADHD medication once he gets to school which can be problematic until it kicks in. Today was one of those days. Jason was supposed to go on a field trip today. During homeroom one of the kids made a joke about having a food fight and Jason true food at this student. Jason was then told by the principal he wasn't going on the field trip today. As expected, he got very upset and this is where he wound up.
During the time he was under the rug I didn't speak to him. He yelled out a bunch of times from under the rug how he hates the principal, a few curses. I didn't respond.
He got up on his own and came into my office, saw the Connect 4 on the table and asked to play a game. We played one game, he explained to me why he wasn't allowed to go on the field trip. I didn't comment on it. He went to his first period and was fine the rest of the day.
The key here was not trying to process the sequence of events that happened, not trying to talk to him about what he would do differently next time and not responding to the comments he was yelling out. There was no need for me to talk here.
-----------------------------------------------------------------------
Sometimes parents talk too much which can escalate a kid who is trying to get back to a state of self-regulation. I'm sure I was guilty of that many times when my son was younger and I didn't help the situation.
Trying to reason with a kid in this state is completely useless. I'm sure I'm guilty of that as well when my son was younger.
Less talking or no talking often leads to faster self-regulation.
The rug that Jason put himself under was more effective than anyone talking to him.
----------------------------------------------------------------------
I wish mental health graduate programs would understand why this rug is a more valuable lesson then teaching theoretical orientations, in my opinion.
Understanding the value of not talking is more practical than any theoretical orientation I learned about in graduate school. I think Jason would probably agree.